We are saddened to share the news of the passing of Dr. Gus T. Ridgel. Dr. Ridgel was one of nine Black students, and the first graduate student, to be admitted to the University of Missouri in 1950 after civil rights groups won a court ruling to desegregate the university. He received a master’s degree in economics with honors in 1951. 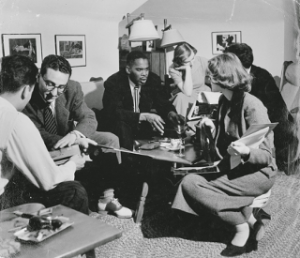 Dr. Ridgel and other students spend time in Read Hall, the former home of the Student Union in 1951.

Our university is forever indebted to Dr. Ridgel. He was a trailblazer who not only endured discrimination, but persevered through his resilience and steadfast belief that his work would enable future generations of Black students to pursue their education at the university. Our continuing work to improve inclusion and diversity at the university is profoundly impacted by Dr. Ridgel’s fight for equality, his courage and his humanity.

In 1951, he enrolled in the doctorate program for economics at the University of Wisconsin. After receiving his doctorate there, Dr. Ridgel conducted post-doctoral research at the University of Chicago and Duke University. In 1960, he accepted a faculty position at Kentucky State University, a historically black university in Frankfort, KY. He eventually rose to serve as vice president of finance and administration and most recently worked as a senior advisor to the KSU president.

In 1987, the Gus T. Ridgel Graduate Fellowships were established in his honor. In 2018, Dr. Ridgel was honored by the University of Missouri through the naming of the atrium in the Lucille Bluford Residence Hall as well as through recognition at the Pre-Graduation Celebration.

The biography below is from Dr. Mary Beth Brown, who recently completed her dissertation “Beyond the Border War: Student Civil Rights Activism at the University of Kansas and the University of Missouri, 1946-1954.”

Dr. Gus T. Ridgel was born in 1926 to Herford Ridgel Sr. (a railroad laborer) and Lugene Ridgel. He had an older brother, Herford Ridgel Jr., and a younger sister, Odera Lee Ridgel. He grew up in Poplar Bluff, Missouri where he attended Wheatley Public School, a school for African American students. He enlisted in the Army in June, 1945. While attending Lincoln University after his service, he was involved in the campus chapter of the AVC, the American Veterans Committee which was composed of World War II student veterans. While pursuing his bachelor’s degree in Business Administration at Lincoln, he was an honors student, the Senior Class President, and a member of Alpha Phi Alpha fraternity. He graduated from Lincoln in Spring of 1950. In February 1950, he applied for admission at the University of Missouri for a graduate degree in Economics. Elmer Bell Jr. and George Horne had filed their case against MU in early February 1950 to gain admission and Dr. Ridgel joined the suit later in the month.

He married Dr. Gertrude Cain in 1956 (they were married 54 years when she died in 2010) who was from Charleston, WV, and was later a faculty member in the Department of Biology at Kentucky State University. 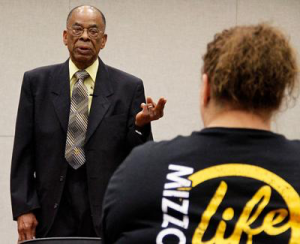 Gus T. Ridgel speaking to Mizzou students during his visit to campus in 2012.

We take this moment to honor the life of this man who was so important in Mizzou’s history and for its future generations.