The Distinguished Leaders in Higher Education lecture series opens the University of Missouri community to the experiences and expertise of higher education leaders across the nation and the world. Whether the speaker is a president of one of America’s leading research universities, or a panel of scholars from a host of backgrounds, this series is intended to broaden the discussion about critical issues facing higher education. Speakers will also highlight the value and challenges of the education and research landscapes, leadership and personal experiences.

Communicating the Value of Flagship Universities to a Skeptical Public 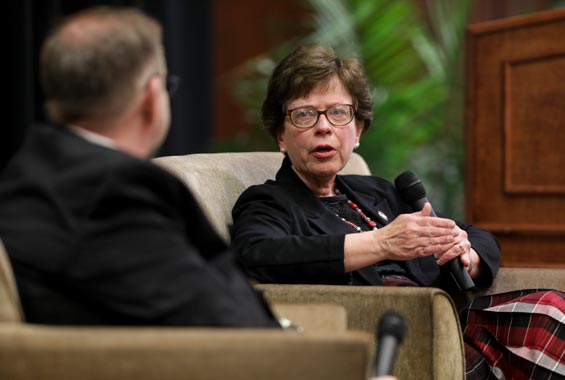 On February 20-21, 2020, Columbia-native and University of Wisconsin-Madison Chancellor, Rebecca Blank, visited Mizzou as our second speaker in the Distinguished Leaders in Higher Education Series. Her lecture, “Communicating the Value of Flagship Universities to a Skeptical Public,” focused on the ways public universities in particular can do a better job of communicating who we are, what our mission is and how we fulfill that mission.

“Communicating our value… is as big a part of our job as leaders in higher education as it is ever been,” Chancellor Blank said.

Her talk covered four ways universities can accomplish that goal:

Chancellor Blank also had the opportunity to participate in “Coffee and Cookies” with Chancellor Cartwright to talk about the many things happening here and at UW-Madison, and to meet with faculty members and other groups.

We are grateful that she took the time to share her leadership and vision with us. Thank you to Chancellor Rebecca Blank for joining us and to everyone who helped make this event so special.

We hope you will join us for next year’s event. Stay tuned for more details over the next few months!

An internationally respected economist who also has spent time in Washington, D.C., working for three different administrations, Rebecca Blank, PhD, has served as chancellor of the University of Wisconsin-Madison since 2013.

Blank previously served as deputy secretary and acting secretary of commerce and was a member of the Council of Economic Advisers. From 1999 to 2008, Blank was a dean and professor of public policy and economics in the Gerald R. Ford School of Public Policy at the University of Michigan. She also has served on the faculty at Northwestern and Princeton Universities, and was a fellow at the Brookings Institution, a nonprofit public policy research think tank in Washington, D.C.

Learn More About the Lecture Series:

MU hosted Satish Tripathi, president of the University at Buffalo, on April 22, 2019, for the inaugural lecture. President Tripathi’s lecture was titled “University Transformation and the Renaissance of a City.”