A world of new music premieres at Mizzou 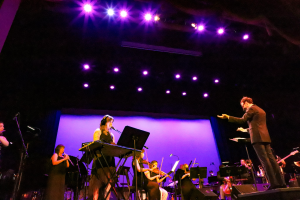 Alarm Will Sound performs new works by eight composers at the Missouri Theatre as part of the Mizzou International Composers Festival.

On July 30, eight incredible composers from around the globe, including Rome, New York City and right here in Columbia, premiered their work at the Missouri Theatre. Their compositions were selected from roughly 500 applicants and performed by Alarm Will Sound as the finale of the 13th Mizzou International Composers Festival.

I enjoyed attending the festival with Jeanne and Rex Sinquefield, benefactors whose support made this week of events possible, as well as College of Arts & Science Dean Cooper Drury and School of Music Director Julia Gaines.

Through opportunities like this and others like the Sinquefield-supported Mizzou New Music Initiative and Sinquefield Music Center, our campus remains a hub for forward-thinking composers.