Marching into a new semester 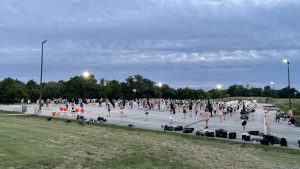 Marching Mizzou on the practice field.

The best marching band in the country never rests.

As we begin a new academic year, Marching Mizzou is back at it under the outstanding direction of Dr. Amy Knopps. Here is a recent photo of them practicing in the twilight.

Marching Mizzou epitomizes excellence, and I can’t wait to see them on Faurot Field as we begin the new season of Mizzou Football. This November, they’ll also appear in the world-famous Macy’s Thanksgiving Day Parade in New York City.