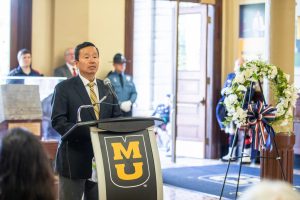 Yesterday, I had the honor of joining our university and city community alongside new Columbia Mayor Barbara Buffaloe to remember the nearly 3,000 who died on Sept. 11, 2001.

Among those lost was Navy Capt. Jack Punches, a 1973 Mizzou graduate with a degree in civil engineering. Capt. Punches was commissioned from our Naval ROTC program and went on to a decorated career. After retiring from the Navy, he served as a senior civilian employee in the Pentagon, where he was killed in the attack.

Representatives from the City of Columbia, first responders, ROTC and military members as well as MU Health Care personnel attended our community memorial and wreath-laying ceremony in the Jesse Hall Rotunda.

Together, we honored Capt. Punches and all those lost while also recognizing the many who continue to serve.