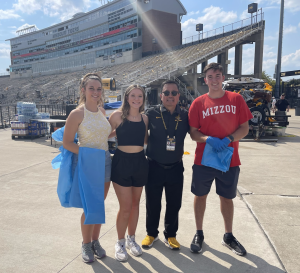 After the win, after Marching Mizzou plays the Alma Mater and after the fans leave Faurot Field, a different team gets to work.

Members of the Mizzou Air Force, Army and Naval ROTC programs volunteer to clean Memorial Stadium after each home game. Following our win against the Abilene Christian Wildcats on Saturday, Kirsten Robinson, Kylie Quinn and Lucas Iffrig were helping out.

ROTC began in 1917 at Mizzou with an infantry regiment. For more than a century, these cadets and midshipmen have shown their dedication to service. Thousands have gone on to successful careers as commissioned officers.

I can’t thank them enough for their continuing commitment to our university and our country.