Boundless: 2019 State of the University Address 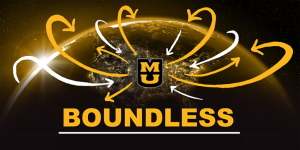 In his October 2019 State of the University address, Chancellor Alexander N. Cartwright emphasized that Mizzou’s value goes far beyond its significant progress in enrollment, giving and research.

In his speech titled “Boundless,” Cartwright said the university is strategically leveraging its strengths and focusing on its most valuable assets — its people —to direct its energy on addressing grand challenges of the world, while also educating the next generation of leaders and translating innovations to society.

Cartwright said it was gratifying to see many more students finding a home and a new family at Mizzou, with freshman enrollment growing by 31% over the last two years and a record-high retention rate at 87.9%. He said Mizzou is working to accomplish its mission by eliminating barriers to affordability, increasing real-world experience opportunities for students and ensuring students graduate with as little debt as possible. 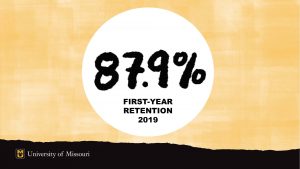 Mizzou is experiencing record-breaking retention, with nearly 88% of freshman returning for their second year.

Cartwright highlighted several student success stories, such as Bailey Stamp and Libby Martin. Two years ago, Stamp, originally from Fredericktown, Missouri, became the first person in her family to attend college. A sophomore business major, Stamp has been able to continue her studies after her freshman year because of support from the Heartland Scholars Academy, a program that connects first-generation business students from small towns with financial assistance and life-changing opportunities.

Looking to the future, Cartwright said he expects exciting new solutions to come from Mizzou’s extraordinary strength in interdisciplinary collaboration.

“Our community has worked hard, and continues to work hard, to build a culture of compassion, collaboration, equity and ambition that further underscores our core values,” Cartwright said. “This culture allows our scholars in the College of Agriculture, Food and Natural Resources to boost livestock health through virus-resistance in pigs, and it enables our linguistics scholars to support Missouri’s language and literacy education. These advances improve our individual lives, fortify our state’s economy, and rescue our human history.” 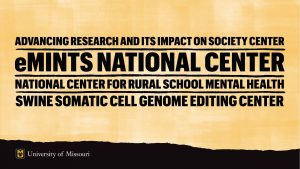 Cartwright also pointed to the impact Mizzou’s research has on improving the lives around the world and for generations to come, including breakthrough treatments made possible by 2018 Nobel Prize winner George P. Smith’s research in phage display.

Cartwright praised faculty for contributing to rises in research that propel the mission of Missouri’s flagship institution. In February 2018, Cartwright set a goal to double MU’s research funding by 2023. Recent data indicates the university experienced significant increases in research awards in 2019 compared to the previous year. In the last fiscal year, MU researchers achieved a 23% increase for grant awards — from $207 million in FY2018 to $255 million in FY2019.

Serve the People of Missouri and Beyond

During his remarks, Cartwright reminded the audience that Mizzou’s people — students, faculty, staff, alumni, friends, parents, families, partners, legislators, governing and advisory boards — demonstrate each day why universities are the key to the nation’s success. 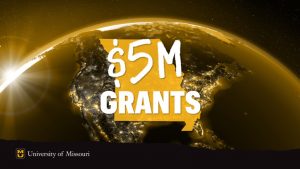 The MU School of Medicine was recently awarded $5 million to train more rural doctors in Missouri.

“People such as the first-generation, Pell-eligible student who graduates in four years with no debt; a staff member who feels empowered to change the university’s operations through driving innovation and new ideas; an alumnus or alumna who changes the world by providing low-cost access to quality health care in rural communities; and a faculty member who develops a pathbreaking way to communicate news to the world,” Cartwright said.

“This is value — a value that is built by people FOR people. And this is Mizzou — a community that shares a passion for affecting people.”