From their unassuming lab in Hill Hall, an interdisciplinary Mizzou team is changing how youth receive mental health support.

In 2019, the Missouri Prevention Science Institute  (MPSI) launched the National Center for Rural School Mental Health with a $10 million grant from the U.S. Department of Education’s Institute of Education Sciences. Modeled off an MPSI program still active in 54 Boone County schools, they are now implementing evidence-based interventions in 25 rural schools across Missouri, Montana and Virginia and will be adding more over the next two years.

MPSI’s experts in education, social work and psychology are prolific researchers. Last year alone, their team published 83 journal articles, logged 8,831 citations and managed more than ten additional local, state and national projects. I stopped by to learn more about the work they do.

Joined by John Middleton, associate vice president for academic affairs, and Chris Riley-Tillman, dean of the College of Education and Human Development, we discussed amplifying MPSI’s already impressive outreach and bringing more life-changing resources to schools in Missouri and around the country.

Engineering the future of Mizzou

President Choi talks with College of Engineering faculty and staff in Ketcham Auditorium.

For the next stop on my campus tour, I met with faculty and staff from the College of Engineering. Their work supporting our students’ growing interest across ten undergraduate degree programs is remarkable. I was trained as an engineer and feel kinship with those who study and further the field.

We discussed continuing that momentum with MizzouForward. To date, about 10% of new MizzouForward hires are from engineering – and we have plans to recruit even more.

I challenged faculty to share with national colleagues the many perks of MizzouForward, including startup investments in new faculty research. I also encouraged them to be ambassadors for Mizzou on campus and to advise students to consider graduate school early in their academic career.

As the college expands its influence, we will explore additional innovative collaborations – such as those with industry partners and the team at the MU Research Reactor (MURR) – which benefit our research mission and positively impact Missouri. 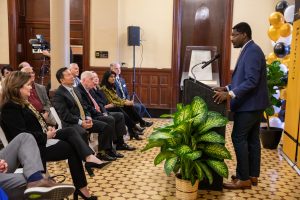 Paul Odu speaks at the announcement in Jesse Hall of a $25 million gift by Rich and Nancy Kinder and the Kinder Foundation to the Kinder Institute on Constitutional Democracy.

One speaker at the announcement was Paul Odu, a senior from Kansas City, who learned the day before that he was a finalist for the Rhodes Scholarship. In December, Paul will receive degrees in economics and constitutional democracy and has participated in numerous Kinder programs, including the Society of Fellows and off-campus opportunities in Washington, D.C. and Oxford, England.

In his remarks, Paul shared how – as a son of first-generation Nigerian immigrants – the Kinder Institute helped open doors he never thought possible. Thanks to Rich and Nancy’s continuing generosity, the resources available to students like Paul are among the best anywhere.

(Left to right) Christine Even with John Middleton and President Choi.

On the fourth floor of Strickland Hall, located next to the Student Center, is the recently relocated and newly expanded Counseling Center.

In the morning before opening to students, Christine Even, a psychologist and director of the Counseling Center, along with Jamie Shutter, executive director of student health & well-being, gave me and Associate Vice President for Academic Affairs John Middleton a tour of their new, welcoming space. It is an impressive operation.

Dr. Even showed us some of the many improvements, which include a larger intake area to provide better privacy as well as a dedicated space for rapidly responding to students in need. The central location also makes access and referrals easier than ever before. No detail was overlooked – even the calming blue paint color was chosen after consultation with the community.

These resources are already making a difference. For example, the average time to schedule a first appointment has decreased from more than three weeks to within 48 hours. There is also a 24/7 crisis service where anyone who needs support or has concerns for a student can call 573-882-6601 and speak to a licensed clinician.

With 23 full-time clinicians, one part-time clinician, four full-time pre-doctoral interns and five clinical graduate assistants ready to help, the Counseling Center is another great example of our holistic commitment to student well-being. 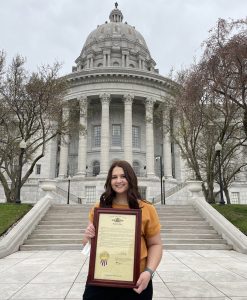 Brooke Weiler after participating in the 2022 Undergraduate Research Day at the Capitol in Jefferson City.

This semester, 21.8% of those new to Mizzou are first gen. For transfers, the number increases to 35.2%. To address common challenges these students face, we have numerous resources that offer support and encouragement throughout their college career.

Brooke Weiler, a senior biochemistry and psychology major, is one of many first-gen students thriving at Mizzou. Her freshmen year, Brooke connected with a faculty mentor who jumpstarted her interest in undergraduate research. Brooke hopes to pay it forward by becoming a biochemistry professor and mentoring others who are first generation.

Our students show the power of Mizzou to change lives and inspire tomorrow’s leaders. Visit the First Gen at Mizzou site for a full list of the day’s events. Additionally, all week anyone can pick up first-gen stickers and buttons in the Student Success Center and the Center for Student Involvement located on the second floor of the MU Student Center. 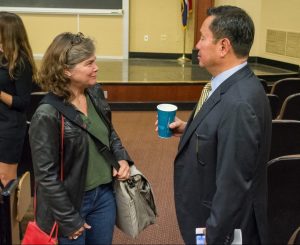 President Choi speaks with D Cornelison, professor of biological sciences, after the meeting.

Throughout the year, I’ve been meeting with faculty, staff and leadership from each of our 13 schools and colleges to see how we can better support their work. Next up was the College of Arts & Science – the largest academic unit on campus.

A&S encompasses more than 40 departments and programs, including museums and a literary magazine, that pursue a wide range of research and creative works to expand our understanding of the world. This semester, around 20% of freshmen began their time at Mizzou in A&S.

As a land-grant university, we have the privilege of translating our research and teaching directly from campus to Missouri. With more than 700 faculty and staff representing many areas of expertise, A&S is a great example of our breadth and impact.

I was grateful for the open discussion and the opportunity to share how each person can help recruit new students, contribute to advancement efforts and build a welcoming campus for all. 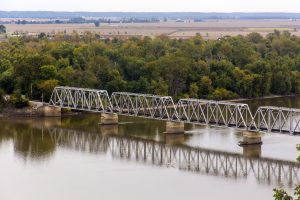 A new reporting network headquartered at the University of Missouri School of Journalism is receiving national attention, including a feature on NPR.

The story is adapted from a five-part multimedia series by the Mississippi River Basin Ag & Water Desk that looks at the impact of increased rainfall in the region.

Launched last year with a $1.4 million grant from the Walton Family Foundation, the Ag & Water Desk is a collaboration between the J-School, Reynolds Journalism Institute, Report for America and more than 10 other organizations and newsrooms around the country. The Desk’s network of reporters investigates complex issues facing communities in the river basin – a massive area stretching from Idaho to New York and Canada to the Gulf of Mexico. The series, “When it Rains,” is the team’s first collaborative project.

The Ag & Water Desk puts students at the center of important issues facing our country. It’s part of our commitment to the Missouri Method of experiential learning that makes a difference. 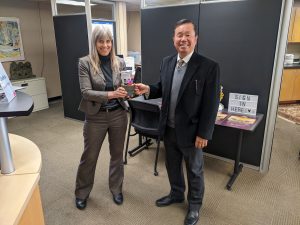 Mizzou’s top students can compete with the best from any university. Central to recruiting and encouraging these high-achieving Tigers is our Honors College.

To think through ways to better support their work and expand access for more students, John Middleton, associate vice president for academic affairs, and I recently met with their faculty and staff. Catherine Rymph, interim director, gave us a tour of their space in Lowry Hall – featuring student art and photography.

This semester, more than 2,700 students are enrolled in the Honors College. Affiliated faculty teach classes that inspire interdisciplinary discovery, while academic advisors help students connect with valuable resources such as prestigious fellowship opportunities. Among many other initiatives, the Honors College administers the Missouri Scholars Academy, a three-week summer program that introduces some of the state’s top high school students to our campus community.

The work of the Honors College is vital to the university and we appreciate their dedicated staff.

A hub for teaching excellence 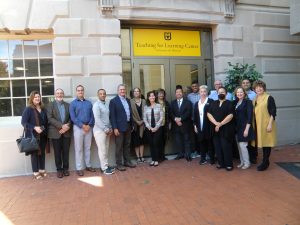 The newly renovated Teaching for Learning Center (T4LC) supports all educators on campus – from graduate instructors to tenured professors.

On a recent visit with other MU leaders, we met with Founding Director Victoria Mondelli, members of their advisory board and staff. Together, we discussed the center’s programing and opportunities for wider use of their many resources.

Established in 2018 and housed on the ground level of Ellis Library, T4LC offers individual or small group pedagogical consultations, asynchronous training courses as well as innovative lessons on topics such as game-based learning. This semester alone, 706 participants have engaged in T4LC programing. I hope to attend one of their many upcoming events.

Visit the T4LC Gateway to schedule an appointment or drop by the center (from 9 a.m. to 5 p.m.) any weekday.

One year of NextGen 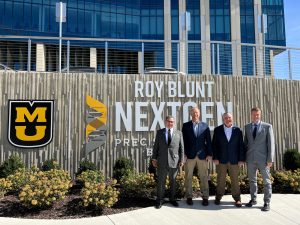 Just one year ago, we welcomed state and national leaders ­– including then-director of the National Institutes of Health Francis Collins – to Mizzou’s campus for the grand opening of the Roy Blunt NextGen Precision Health building.

In that short time, we’ve made incredible research breakthroughs, announced world-class hires (including Dr. W. David Arnold as executive director of the NextGen Precision Health initiative) and continued to grow the facility’s impact. Since Oct. 2021, we’ve brought in $97 million in grants.

NextGen is also connecting students with the tools and expertise they need to launch groundbreaking careers in science. This semester, we welcomed our inaugural cohort of 16 students for the Translational Biosciences Graduate Program. Across six emphasis areas, this program leverages NextGen’s strengths to further biomedical research and improve the health of our communities. 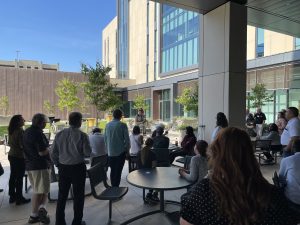 In the coming years, we look forward to welcoming additional faculty, students and industry partners. We’re also building out the fourth floor to serve as the future home of NextGen neuroscience and reproductive biology researchers.

Together, we’re revolutionizing how we deliver personalized health care for Missouri and the world.